Why do we see so much infection in some places, some hosts, some species, and much less in others? What are the ecological and genetic drivers of this variation?

I also asked these questions for the fungus Microbotryum violaceum, which causes anther-smut disease in the Caryophyllaceae family (learn more here). To briefly summarize here:

Microbotryum is absent from rare species in the Silene genus, and this seems to be due to limited transmission opportunities in small, fragmented populations. We find that this pattern is quite general: federally endangered plant taxa have lower fungal pathogen richness than non-endangered relatives (Gibson et al. 2010 Oikos).

Anther smut is also noticeably absent from annual species – 80% of perennial Silene host species are host to M. violaceum, while no annual Silene species is known to naturally host the disease (Thrall et al. 1993, Hood et al. 2010). We showed that annuals can acquire the disease via direct inoculation – in other words, they’re susceptible to infection. Their lack of infection in the wild is thus very likely to be a direct result of their ecology. The life cycle of Microbotryum is such that the annual habit prevents transmission. We also show that this “ecological protection” selects against other forms of costly resistance in annual taxa (Gibson et al. 2013 Ecol Evol). 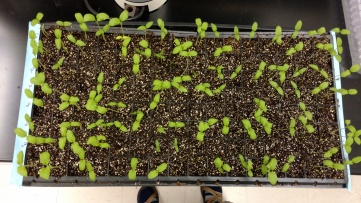